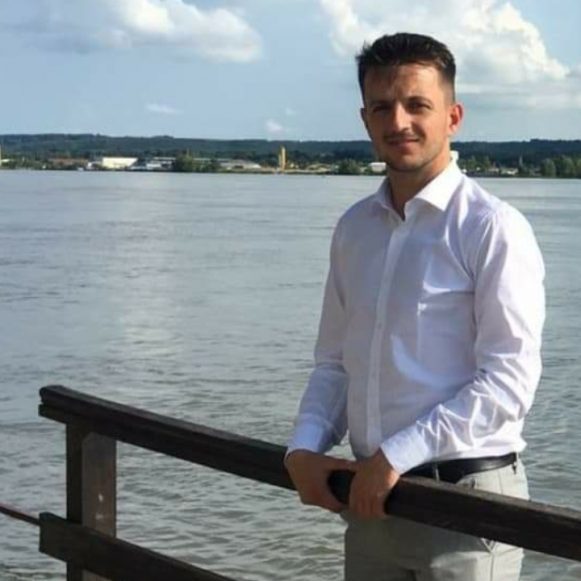 My name is Razvan Ioan Ursachi and I am a student at the Agriculture Science University in Timisoara, Romania. I am in my 4th year and I am studying landscape architecture. At the same time, I can say that I was called by God to be a student in the missionary equipping program called “Equipped to Equip.”

I grew up in an Orthodox family. Even as I was a child, I felt a profound need to know God. However, in the family I grew up in, I was not taught Christian morals like the Scripture offers. During my adolescence, I neglected the interior calling from God and became more attracted to what the world offered me. At the age of 16, after a party, I felt irregular heartbeats which led to a panic attack. My life had changed radically, and the following 2-3 years I continued to have these attacks regularly. This resulted in a progressive depression in my life.

I was desperate and hopeless. I even had suicidal thoughts and I was confused. One day, my mother entered my room with a Bible in her hand. This was something that surprised me, and I was going to reject it. Because I respected her, I took the Bible, but I also said, “How can a book help me when I need a doctor and treatment?” Her response was: “Before you open the Scripture, ask God a question.” There with little hesitation, and I decided to follow the advice of my mother. At that moment, I opened my Bible, and God spoke to me about the hope that I had been searching for a long time.

Holding tightly to this hope, through divine intervention, my life received a new understanding of profound knowledge of the One who created me. However, I returned to my sinful practices from the past, without thinking too much about the calling that I had received then. This lifestyle continued until I was invited one night to an evangelistic event in my hometown, Teremia Mare. Although I was already blinded due to what the world offered me, my soul never ceased searching for God. After much interior struggle, I accepted the invitation, and I walked to the front like a prodigal son into His Father’s house. That night I felt God’s embrace and was very sensitive to His Word. I, then, recognized the true meaning of Christ’s death and sacrifice. I then received a new identity in Christ.

Today, I am a man of hope. I am a son born of God, ready to share with all people this Gospel, which changed my life and that has power to change other lives, as well. For the same purpose, I also wrote a book entitled, “Calling.” This book speaks about the purpose of every man in this world.

Children’s ministry and helping in the Youth ministry!

A bright Christmas for a family from Ukraine

The E2E Program was developed out of the need to train missionaries...
Read more

We actively works with missionaries throughout the Balkans...
Read more

We started focusing our attention to Craiova at the beginning of 2018. That year...
Read more

Our vision is to bring the hope of Christ to the Southern Part of Romania through a...
Read more

You can get involved in Razvan’s Ministry in the following ways:

Short-term missions
Join or lead a team to Romania and work alongside us in evangelism, kids ministry, Roma ministry, church-planting and much more.

Mentorship
Become a mentor or encourager for me or someone on my team with a once-a-month video call, text message or email.

Financial Support
Become a financial partner by donating $25 a month for my personal needs or for one of my projects.

Promoting
Become one of my ambassadors by representing my ministry in the US, 2-4 hours a month.