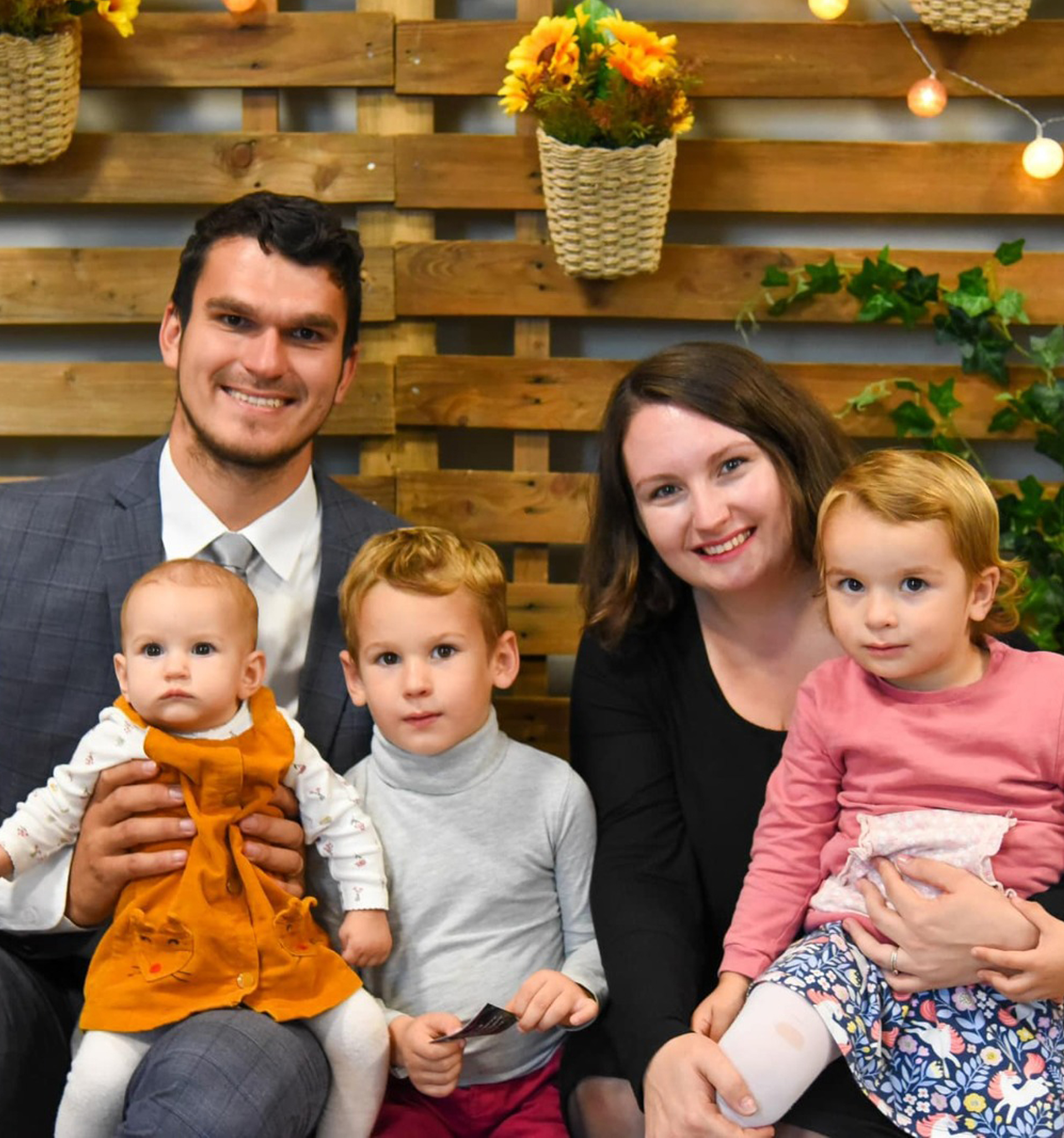 My name is Octavian-Florin “Tavi” Ciudesnic and I was born on June 2nd 1992 in Tulcea, Romania. Through God’s grace it was in my home town that I met the love of my life, and married on August 2nd 2014.  God has added to our family over the years with first a son, Caleb and then a daughter Maysa.  Together, of family goal is to spread the Gospel to people.

At a Christian Camp in 2007, God changed my life and made me His own. In 2009 I was baptized and throughout the next year I started understating that God was calling me in His ministry.

In April 2015 we had the first opportunity to do ministry in the area of Romania called Oltenia. For the next 2 years we traveled there every weekend from over two hours away to support the ministry in three villages, Floru, Icoana and Ursoaia.  In May 2017 God gave us the ability to moved in to one of the villages permanently, as He spoke to us, called us, and blessed us by name to this area. (Exod 33:15).

A ministry with impact in Icoana

The Icoana community is located on the easter boarder of Olt county on the shore of the small river Vedea and contains the following villages: Icoana, Floru and Ursoaia.

The community’s population is at approximately 2000 people. 94.52 % of the inhabitances are Romanians and 94.05 % are Orthodox Christians. There are approximately 200 kids with a school that goes up to 8th grade.

The Oltenian Region is located in the south of Romania below the Carpathian mountain range and contains roughly 1.7 million people. The Icoana community is located close to the center of the region, about 2 ½ hours from the Capital, Bucharest.

Throughout most of the country history it was influenced by the Germans and the Hungarians and thrived due to the communication and collaboration. However, the mountain range cut off this flow of information to the southern region and allowed for the influences to come from the south, mainly from the Ottoman Empire. Due in part to these influences and ways of thinking the past few decades there has been many advancements and change of attitudes in the north, but the southern rural communities have mainly rejected most of these advancements and in some cases not even aware of their existence.

The south is peppered with farming communities, simple living and a historical distrust of outsiders. Since the fall of communism, the unemployment rate in the villages can soar into the 80s and many families are forced to get work outside of the country as labors, mainly working the fields and factories. Families are often split for many years as one or sometimes both parents are forced to look for jobs far away from their children. With governmental assistance families struggle to make their daily needs. Winters last around three months, hovering around the freezing line and can dump large amounts of snow at any given time. Heat is essential, but often neglected due to finances. Families are forced to squeeze together during these months to stretch what little income they have supporting each other in all task around the home.

Cars are a luxury most cannot afford and horses with their carts are just as common on the road. Some houses are without electric, some are without in-house bathrooms, and most are without proper insulation and windows. The families work hard to keep their houses looking beautiful however poor they might be. Flowers are known to bloom throughout most of the year, a garden is kept to supplement income, animals litter their quarter acre gated plots of land, and fruit trees can be seen all around. The beauty of the landscapes is increased by the pride and ownership of the land they work.

The Orthodox Church has been the backbone of the communities for many generations, and in light of outsider influences has made a strong impact. The Church is proud of its 2000-year history and holding to its traditions has changed the belief of Christ’s grace into a religion of legalism. The official stance of the church on their website sums it up “Jesus Christ and his disciples came to earth to establish the church for the salvation of men”. Beautiful and lofty churches with copper roofs, decorative stone and rich tapestry tower over the tiny houses around them in each village. Just like their buildings, the priest designated to that area lords over the people and often threatens.

With many families forced to work outside the country, or at least outside of the village family instability is rampant. Children are raised by relatives or just one of their parents while work is be sought. Often a student will drop out of school before 8th grade to help their family or simply don’t see the need to go on with school. Many students need basic help with schoolwork, but caretakers are often unable to help due to a lack of understanding themselves. Even children who are desiring a higher education are often limited by money, transportation, or needing to keep the family running. Only larger villages or cities have high school and those children who live outside these high school areas can continue if their family can afford to send their children to live in boarding type school while they study. Even if a child is smart, interested in learning and are motivated they are not always able to continue anyway.

Despite the families constant need to split up, the Romanian family is known to be the center of their world. Parents, siblings and even extended families often live in the same plot of land or very close to each other. In the past two decades the need for jobs has systematically decreased the amount of people who remain in the village once they come of age. Families who were once so close to each other have been torn apart by simple the need to live. Therefore, it is so important to keep families together, by educating the young and allowing them opportunities to go to school so that in the future their families will not be subjected to these repeatable patterns.

Together, with other Christians from the Icoana community we want to be a living body of Christ which spreads the gospel of Christ to any being from the community outwards to the rest of the world (Mark 16:15).

Through spiritual strengthening of the Church, apprenticeship, evangelistic and humanitarian aid projects.

Through apprenticeship and recruiting, so we can form a team which develops, maintain and manages the projects that fulfill our vision (children ministry, youth ministry, street evangelism, humanitarian aid projects).

Opportunities to get involved: